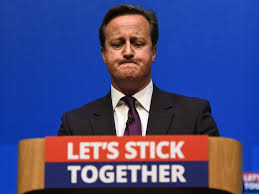 The recent Brexit result has made me think about a number of issues: first, the distributional impact of trade integration, immigration and the welafre state; second, the false binary presented by the referendum as the juxtaposition between globalism versus nationalism and (neo)liberalism versus (neo)Marxism; and third, the general costs and benefits of nation size that lead to a country’s institutions and their break-up (devolution) or formation (integration).

These probably warrant lengthier posts , but today I wanted to take a thought for a walk on the third issue. The break-up of nation-states have received quite a bit of academic attention especially after the end of the Cold War. Most notable are the examples of the Soviet Union and Yugoslavia. However, most of this literature have so far focused on the role of ethnic nationalism, or more traditional perspectives of traditional international relations theory (balance of power under realism, or liberal theories on democratic peace or the hollowing out of the state). Obviously, there also exists specific analyses in history, politics and economics on the specific events and processes that led to their dissolution. However, I wanted to take a step back and think about the first principles of optimal or at least “stable” nation-sizes. There are obviously issues of path dependency and punctuated equilibrium at play, as well as the potential rent-seeking behaviour of politicians (ethnic nationalists) and voters (wage-labour and immigration) that may result in sub-optimal sizes. There are also institutional isses: such as political governance (i.e. democracy, central voter theorem, level of coercion, nationalism) and the economy/ic (system) (i.e. level of income, inequality).  These are definitely points of further discussion, but I wish to flag and ignore them for a momemt.

Here are some key assumptions:

What are some of the general costs and benefits?

In a grossly simplified model, larger nation sizes can achieve benefits such as economies of scale of public good provision (i.e. legal systems) and economic growth (i.e. reduced transaction costs, labour mobility). These are by no means exhaustive. To an extent it can also achieve better macroeconomic stability – although this is mostly in relation to fiscal transfers through welfare states made possible only through common citizenship. However, this does not appear to apply to monetary policy for larger nations. Independent monetary policy tends to favour smaller nations due to being able to fine-tune their monetary policy more specifically to the less “diverse” economy. Nonetheless, it could be said these are largely economic benefits, and can be said to promote stability if economic growth is sufficient.

From our assumption: the cost of a large nation is obviously increased heteogeneity of political preferences (i.e. nationalism, but also more ‘bland’ policy preferences). These can create instability.

Then there is political governance and norms, which can be assumed to be an exogenous variable that can both maintain or create (in)stability. The variable is probably not as indpendent, as there are probably diseconomies of scale in terms of administrative cost at some point. Nonetheless, these governance/norms can be seen as “levels of control”. The formal type of control would be authoritarian control (coercion: does not tend to change preferences), the informal kind of would be some type of unifying civic nationalism (nudging: tries to change preferences). It should be noted that decentralisation is not the same as a democracy, as the former refers to the locale of polices whereas the latter entails the means. This distinction is important as many often advocate for democracy in China as its economic growth slows and as its middle class becomes more educated and pay more tax – democratisation may not actually create stability but actually accelerate the collapse of the CCP and China (cf. glasnost, perestroika and the referendum before the breakup of the Soviet Union).

Therefore, according to this very simple theory, this leads to the (perhaps not-very-surprising) conclusion that:

Large “nation-states” (or political economic institutions need to): 1) maintain high levels of economic growth,  2) become more coercive (less democratic), 3) promote very strong forms of (civic) nationalism, and/or 4) decentralise (federalism or devolution). The converse will is posited for small “nation-states” (and associated reasons for integration) – economic growth need not be as fast,they are able to be more democratic, nationalism are likely to be more ethnic than civic  with an inverse relationship to tolerating integration. Obviously if one of these decreases, others may need to increase, and vice versa.

I think this theory can say quite a bit about the formation and break up of polities such as the European Union. It also allows us to draw some interesting conclusions about Soviet Union, China and the United States. All of these states differ on each of these conditions. There are perhaps interesting things to note regarding recent trends of austerity in UK/Europe, and its fiscal/monetary arrangement. However, this clearly does not prevent a full picture of stability (cf. the original list of issues such as path dependency and specific identity politics, also distributional effects of integration will also be a factor) and the costs and benefits can be further elaborated. The role of population size also needs to be considered. In Part 2, it might be worthwhile to expand on these and attempt to apply this to these specific examples, in particular to the European Union.

This entry was posted in Uncategorized.

MiniChart: Attitudes towards Immigration and leaving the European Union « Max Lin said:
June 28, 2016 at 9:13 am

[…] European Union countries have a preference to remain, which would coincide with the theory in my previous post on economic and political (dis)integration – this is also interesting because if trend exists, it contradicts the observation that […]